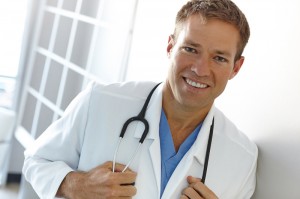 U.S. Navy Commander Andrew Baldwin, M.D. is a physician, humanitarian, U.S. Navy diver and media personality currently serving on the Family Medicine Staff at Naval Hospital Camp Pendleton in Oceanside, CA. Prior to his current position, Dr. Baldwin served at the Navy’s Bureau of Medicine and Surgery in Washington, D.C. as a spokesman and advocate for Navy medicine. While in D.C. he assisted the U.S. Surgeon General with a program called Healthy Youth for a Healthy Future and currently serves as an advocate for the Let’s Move Campaign headed by First Lady Michelle Obama. Both of these programs target childhood overweight and obesity.

Lieutenant Commander Baldwin was born in Lancaster, Pennsylvania where he was Valedictorian of his high school class, an All-American swimmer, and was the ESPN national scholar/athlete of the year in 1995. After receiving a full Navy ROTC scholarship to Duke University, he chose to attend the prestigious school and pursue a pre-med curriculum. Baldwin swam as a varsity athlete throughout his undergraduate career and graduated with honors as a student-athlete in 1999 with a Bachelor of Science in Biology and was commissioned into the United States Navy. Baldwin pursued his dream of becoming a physician, by enrolling and completing medical school at the University of California – San Francisco School of Medicine. After graduating in 2003, Baldwin completed a year internship in General Surgery at Naval Medical Center San Diego, and went on to serve his operational duty in the Navy as an Undersea Medical Officer.

He completed Navy Dive School and Undersea medical training and spent a three-year tour in Pearl Harbor, Hawaii with Mobile Diving and Salvage Unit ONE. While stationed in Hawaii, Dr. Baldwin deployed to the Philippines, Thailand, Laos, Singapore, Cambodia, and the Republic of Palau on various diving, recovery and humanitarian missions.

Upon moving to California, Baldwin took up cycling, and with his past running and swimming prowess was able to put them all together in a sport new to him – triathlon. He completed his first triathlon in 2001 with Team in Training, combining sport and charity for the first time, and finished atop the podium. He was hooked. Baldwin achieved his childhood dream in 2002 when he qualified for and completed the Ironman Triathlon World Championships in Hawaii. Baldwin has since been named to the All-Navy Triathlon Team five times, been a three time U.S.A. Triathlon All-American, and competed internationally in numerous Half-Ironman and Ironman events. He is an eight-time Ironman finisher, and believes firmly in the motto “Anything is Possible!”

Baldwin has been featured in numerous media outlets including Men’s Health Magazine, GQ Magazine, Runners World, and Triathlete Magazine. His television appearances are extensive including interviews on Good Morning America, The View, and FOX News as well as a special guest appearance on ABC’s Extreme Makeover Home Edition. Dr. Baldwin was also the star of ABC hit show, “The Bachelor: An Officer and a Gentleman”.